I think that the rider on the left in this video is quite scared whereas the person on the right is enjoying the thrill of the ride and the adrenalin rush it is bringing. The only thing that I think could be going through their heads are: “AAAAAAAAAAAAAAAAAAAAHHHHHHHHH! Aah aaha aah!” And “wooooooooooo hoooooooooooooo!” I think that I would enjoy that ride and hope to go on it if I get to go to the Adelaide show this year. The one on the left doesn’t seem to do anything but look up, look down, and open and close his mouth. The man on the right however, is yelling and screaming for it is so much fun through his eyes and mind. That is what I see when watch this video.

I really enjoy playing minecraft with my friends. I like to play minecraft because it is a very creative game that includes a lot of real life situations through fun. For example; you need food, like apples from trees or farms, you need a shelter, there are dangerous creatures that you need to either run from or fend off. I think minecraft CAN be very realistic which is why I like it.

I also like to read. I like to read because it lets me enter a different world. A world of my own. And books usually have very interesting plot lines which I enjoy following. I really like to talk to others who have read these books and find plot holes with them.

I enjoy these activities.

Nearing the middle of term one, Mr Z, Ms Whelan, and ms fisher, a student teacher helping at the time, had the idea of doing a fringe festival. Our class and Ms Whelan’s class got into groups of up to 6 and picked a performance to do on the day.

I was in a group with Luka L. We decided to do a classic magic show because we both liked magic. We had a few troubles along the way. Some of them were that we couldn’t work out what to wear and what music to use. We decided to use a soundtrack from iMovie called “neon” as background music and to wear a top hat each and a black top each.

On the day we were very anxious. The tables were moved out of the room and the chairs were moved into crescent shapes around the back of the room. Ms whelan suggested that we use a tablecloth to make us seem even more professional. So I went to the library with Luka and got a table cloth. Then, after recess, everyone left the performing area. We were about to start.

People started coming in while our backing track was playing. Then, at 11:10 (the time our performance started) I rang the bell and stood at the table, waiting. Libby and Morgan, the group also performing during our session, were standing next to me and Luka. We started the intro and everything was going smoothly. Until it was time for Libby and Morgan to perform (they went first), and the smart board failed on us and Sophie, a friend present at the time, had to start a game after Luka and I did our performance. It was a disaster. And we had to do a rushed 3:00 min workshop before our audience of 9 could leave.

At the start of the next performance for us at 1:30, we again started the backing track as the audience walked in and rang the bell to start the intro. All was going well. Libby stood at the table to start her performance. She and Morgan tried putting the iPad screen onto the smart board. And it worked! Their performance went smoothly. Then Luka and I stood up. We did our intro. Good. We did our first tricks. Good. We did the last parts of our performance. Fine. We got everything how we planned it! Then we had a workshop to do. We taught our smaller groups to do, stop motion for Libby and Morgan, and a simple magic trick for us. Everything went along without a hitch.

If I had to do this again, I would try to get better costumes, maybe better tricks, and have a better understanding with the digital technology.
That was my point of view regarding the 2016 woodend fringe festival! 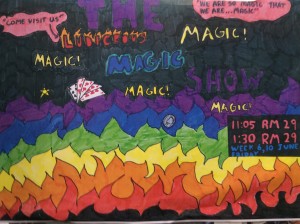 This is a photo of what my poster looked like. 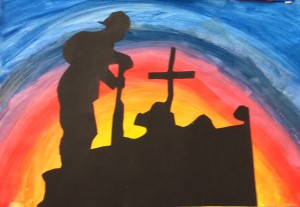 What is ANZAC Day?

And why do we commemorate ANZAC Day?

we commemorate ANZAC day because lots of soldiers died in the war and to possibly stop future events as bad as this one.

(sorry the video was too big to have in this post🙁)

What are tidal ecosystems?

A tidal ecosystem is an ecosystem that is in the area between high and low tide zones.

why are tidal ecosystems important?

Tidal ecosystems are important because the tides bring food for crabs and other small creatures without bringing danger.

Where can you find tidal ecosystems?

you can find them at beaches and in the sea.

what animals and plants live in tidal ecosystems?

animals in tidal ecosystems may include crabs, small fish, barnacles, brittle stars, algae, Ray’s mussels and sea snails and plants may include mangrove trees or seaweeds. 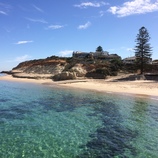 This year the year 6/7 classes and the 5/6 class went to port Noarlunga for an aquatics program. We went on Monday and Tuesday week 5 term 1. The purpose of the aquatics program is to try new things that challenge us or to improve our current skills.

After arriving at the beach in the bus’s, we were sorted into groups according to which activities we were doing first. I did wave skiing as my first activity. Wave skiing is sort of kayaking except you can stand up on the wave ski. Our group started off by learning how to paddle properly and how to get back on if we fall off. Then we paddled out into deep-ish water and just paddled around for a while.

After recess at around 11:45 AM I went surfing with some other kids. I did pretty well in my opinion. Considering it was my first attempt at surfing. We did things like learning how to stand on a board before we went into the water. The sea was pretty flat so we didn’t go very deep. Then we went to lunch.

After lunch we did a river walk along the port Noarlunga river. We learned lots of things about the river and the sand dunes on either side of it. Then we went back to school at around 2:45 PM so that we got to school at 3:05 PM

The next day we did the same things as the day before except we went deeper on the paddle skis and the sea was so flat we couldn’t catch any waves more than 5 metres out from the shore. And instead of a river walk, we did a reef walk. We went out to the reef on boats with nothing on our feet except thick socks or soft shoes so as not to damage the reef. We learned lots then.

I really enjoyed surfing even though the water was flat and the reef walk at low tide.
I learned how to stand on a surf board and wave ski and how to identify crustatians on the reef. I think it would be an improvement if the program ran for a whole week and we got to do everything. Next time I will do snorkelling and maybe surfing again.
I loved aquatics!

This is Boris. He is a wetland creature. 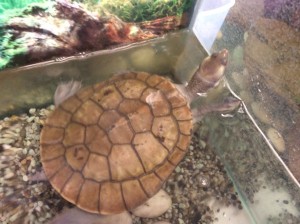